TROPICAL RAINFORESTS OF THE WORLD

|  Last updated Mar 2, 2014
Tropical rainforests are a world like none other; and their importance to the global ecosystem and human existence is paramount. Unparalleled in terms of their biological diversity, tropical rainforests are a natural reservoir of genetic diversity which offers a rich source of medicinal plants, high-yield foods, and a myriad of other useful forest products. They are an important habitat for migratory animals and sustain as much as 50 percent of the species on Earth, as well as a number of diverse and unique indigenous cultures. Tropical rainforests play an elemental role in regulating global weather in addition to maintaining regular rainfall, while buffering against floods, droughts, and erosion. They store vast quantities of carbon, while producing a significant amount of the world's oxygen.


Despite their monumental role, tropical forests are restricted to the small land area between the latitudes 23.5° North and 23.5° South of the equator, or in other words between the Tropic of Capricorn and the Tropic of Cancer. Since the majority of Earth's land is located north of the tropics, rainforests are naturally limited to a relatively small area.


The global distribution of tropical rainforests can be broken up into four biogeographical realms based roughly on four forested continental regions: the Ethiopian or Afrotropical, the Australiasian or Australian, the Oriental or Indomalayan/Asian, and the Neotropical. Just over half the world's rainforests lie in the Neotropical realm, roughly a quarter are in Africa, and a fifth in Asia. The remaining five percent or so are scattered across Australia, New Guinea, and various Pacific Islands. 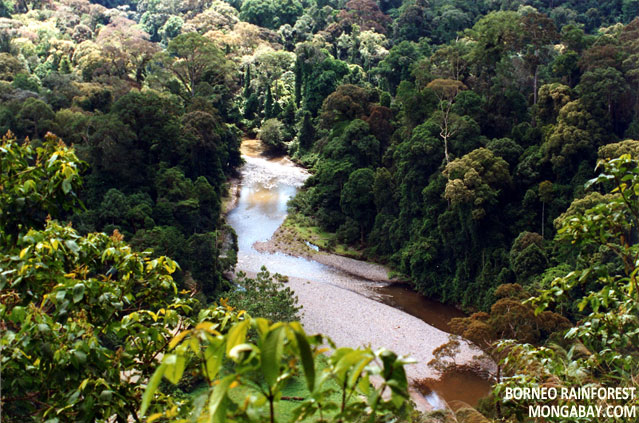 Rainforest on the island of Borneo. (Photo by Rhett Butler)