|  Last updated July 27, 2012
Tropical rainforests across the world are quite diverse, but share several defining characteristics including climate, precipitation, canopy structure, complex symbiotic relationships, and diversity of species. Every rainforest does not necessarily conform to these characteristics and most tropical rainforests do not have clear boundaries, but may blend with adjoining mangrove forest, moist forest, montane forest, or tropical deciduous forest.


Tropical rainforests lie in the "tropics," between the Tropic of Capricorn and Tropic of Cancer. In this region sunlight strikes Earth at roughly a 90-degree angle resulting in intense solar energy (solar energy diminishes as you move farther north or south). This intensity is due to the consistent day length on the equator: 12 hours a day, 365 days per year (regions away from the equator have days of varying length). This consistent sunlight provides the essential energy necessary to power the forest via photosynthesis.

Because of the ample solar energy, tropical rainforests are usually warm year round with temperatures from about 72-93F (22-34C), although forests at higher elevations, especially cloud forests, may be significantly cooler. The temperature may fluctuate during the year, but in some equatorial forests the average may vary as little as 0.5F (0.3C) throughout the year. Temperatures are generally moderated by cloud cover and high humidity.


An important characteristic of rainforests is apparent in their name. Rainforests lie in the intertropical convergence zone where intense solar energy produces a convection zone of rising air that loses its moisture through frequent rainstorms. Rainforests are subject to heavy rainfall, at least 80 inches (2,000 mm), and in some areas over 430 inches (10,920 mm) of rain each year. In equatorial regions, rainfall may be year round without apparent "wet" or "dry" seasons, although many forests do have seasonal rains. Even in seasonal forests, the period between rains is usually not long enough for the leaf litter to dry out completely. During the parts of the year when less rain falls, the constant cloud cover is enough to keep the air moist and prevent plants from drying out. Some neotropical rainforests rarely go a month during the year without at least 6" of rain. The stable climate, with evenly spread rainfall and warmth, allows most rainforest trees to be evergreen—keeping their leaves all year and never dropping all their leaves in any one season.

Forests further from the equator, like those of Thailand, Sri Lanka, and Central America, where rainy seasons are more pronounced, can only be considered "semi-evergreen" since some species of trees may shed all of their leaves at the beginning of the dry season. Annual rainfall is spread evenly enough to allow heavy growth of broad-leafed evergreen trees, or at least semi-evergreen trees.

The moisture of the rainforest from rainfall, constant cloud cover, and transpiration (water loss through leaves), creates intense local humidity. Each canopy tree transpires some 200 gallons (760 liters) of water annually, translating to roughly 20,000 gallons (76,000 L) of water transpired into the atmosphere for every acre of canopy trees. Large rainforests (and their humidity) contribute to the formation of rain clouds, and generate as much as 75 percent of their own rain. The Amazon rainforest is responsible for creating as much as 50 percent of its own precipitation.

Deforestation and climate change may be affecting the water cycle in tropical rainforests. Since the mid-1990s, rainforests around the world have experienced periods of severe drought, including southeast Asia in 1997 and 2005 and the Amazon in 2005 and Amazon in 2005 and 2010. Dry conditions, combined with degradation from logging and agricultural conversion, make forests more vulnerable to wildfire. 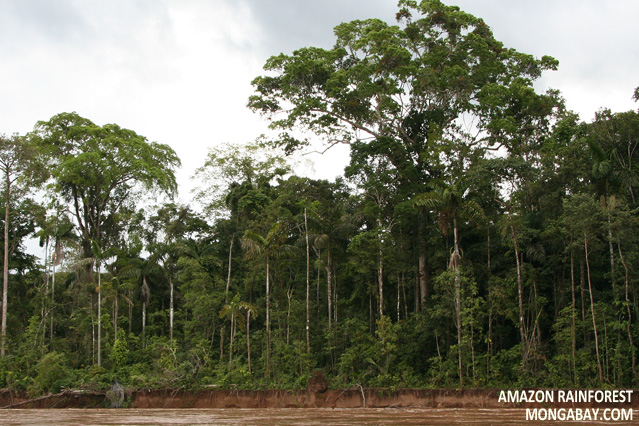 Rainforest along the bank of the Tambopata river in Peru. (Photo by Rhett Butler)

Continued / Next: Structure of the tropical rainforest - part II