THE INFLUENCE OF ICE AGES AND ECOTONES ON BIODIVERSITY


Recent studies suggest that ecotones, transition zones between habitats, play an important role in the biodiversity of rainforests. Ecotones bordering rainforests and savannas, secondary forests, plantations, and other forest types are evolutionary hotbeds where evolutionary competition may lead to the rise of new species. Scientists say that populations in ecotones may specialize to the niche and diverge significantly from populations of the interior of the forest. This new theory initially appears to challenge the popular view that the ice ages had a highly significant role in rainforest diversity. However, some scientists speculate that the receding forest and fragmentation of the ice ages would create a larger area of ecotones, contributing further to biodiversity. Therefore the combination of both conditions may have contributed to the well- known diversity of tropical rainforests.


The relative age of a tropical rainforest plays a role in its diversity, although the role is still largely debated. Tropical rainforests are probably the planet's oldest continuous ecosystems. Tropical rainforests began to take their form some 140 million years ago during the age of the dinosaurs, the late Cretaceous. It was during this period, when much of the world's climate was tropical or sub-tropical, that flowering plants originated and later spread across the globe.

Over their long history, species have come and gone, communities have been destroyed and reformed, and entire systems altered. Along with the changes, new relationships within the system form as new species emerge. Generally the changes are relatively slow, although there have been times of upheaval where drastic change occurred over a short period of time. These natural upheavals appear to foster an increase in biological diversity as evidenced by the effect of the ice ages, especially on the Malay Archipelago in Southeast Asia.

Today, many of the 20,000 or so islands of the Malay Archipelago are covered with tropical forest. Some of these rainforests have existed in some form or another for the past 100 millions years, although, as discussed in section one, the ancient forests had fewer large mammals and no flowering plants. When the ice ages came and ocean waters condensed or became locked up in polar ice, the floor of the shallow South China Sea was exposed, allowing the crossover of species from mainland Asia. Although this region was less affected by the temperature drop than other areas because of its proximity to the ocean and the equator, the climate cooled significantly enough to cause tropical rainforest to recede to scattered patches. The areas formerly forested with tropical rainforest gave way to savannas and montane forest ecosystems. Most of the region had a distinct short rainy season.

When the ice ages came to an end, a warmer climate returned and the ocean rose again to re-flood the shallow areas of the South China Sea. Many of the plants and animals that had crossed over from the mainland were trapped on the reformed island habitats. In addition, some of the montane and more temperate species adapted to the gradually warming climate and became tropical species. The small pockets of tropical rainforest that survived the ice ages served as biological reservoirs to repopulate the expanded tropical forest zone. Some of the tropical species that had been separated into different pockets had radiated enough during their isolation that when they did again cross paths, their habits and physiological features had changed enough (adapted to their niche within the tropical pocket) that they could no longer breed, and could be considered distinct species.

Diversity was again multiplied by subsequent ice ages which caused isolation and subsequent adaptive radiation into more distinct species. For example, take a hypothetical elephant species that began as a single species on mainland Asia. During the ice ages, it expanded its range to some of the islands of the Malay Archipelago, which, with the lower ocean levels, had become connected to the mainland. When the ice ages came to an end, elephants became stranded on the islands. On the smaller islands, those elephants with a smaller body size tended to survive and reproduce more successfully because their lower dietary requirements could be sustained by the smaller amount of food available on the island. The larger individuals tended to be less successful reproductively. Thus evolution favored the dwarfing of elephants on the islands over the course of several thousand years and when the next ice-age crossover came, the island elephants would not breed with the mainland elephants. Since the island elephants filled a different role on the Asian mainland during the crossover, some dwarfed island elephants remained on the mainland during the next drop in water levels. These elephants, now isolated from their island ancestors could diverge enough to be unable to breed with the island elephants during the next crossover. Thus over the course of two ice ages, one species of elephant became three, not considering the other forms that would develop on islands with different niches, like those with more mountainous terrain, swampy bogs, or different plant species on which to feed. And so the process of evolution through geographic isolation, continues, and more species are formed.

The Amazonian rainforest was affected in a different way than Southeast Asia by the ice ages because the change in sea level did not play the same role as in the existence of islands. Instead, the cooler temperatures may have lead to a great contraction of the tropical rainforest and resulted in its replacement with savanna. During the ice ages, carbon dioxide levels drop by as much as 50 percent, causing the majority of plants, which require high levels of carbon dioxide (known as C3 plants) to decline. Some plants, known as C4 plants, especially grasses, grow well under low carbon dioxide conditions. Thus (according to a leading theory), when carbon dioxide levels dropped during glacial periods, rainforests full of C3 plants retreated and savanna grasses (C4 plants) expanded their range. Rainforest was broken up into islands separated by savanna, while communities of species were divided in isolated pockets. Some communities diverged and when the forests expanded and the communities were rejoined, they were altered enough so they could or would not breed.

This "refugia" theory, though plausible and supported by some pollen evidence, is not universally accepted. Recent studies in a few limited locations suggest that the Amazon may have remained densely forested during the past ice age. In 1999 Hooghiemstra and van der Hammen suggested that pollen evidence supports both theories and both scenarios may have occurred in different parts of the Amazon basin and at different periods of time.

A theory proposed in 2005 argues that Amazon rainforest biodiversity has much less to do with climate change than it does with the biology of native species and the forest itself. Looking at the "DNA-clock" of butterfly species in the Amazon basin, scientists from University College London concluded that rainforest butterflies evolved at very different rates, a finding that suggests their evolution is largely independent of external factors like the ice ages. Lead author of the study, Jim Mallet, says that research "rules out geographic isolation caused by past climate change as the main cause of species evolution. Instead the evolution of species must largely be caused by intrinsic biological features of each group of species." 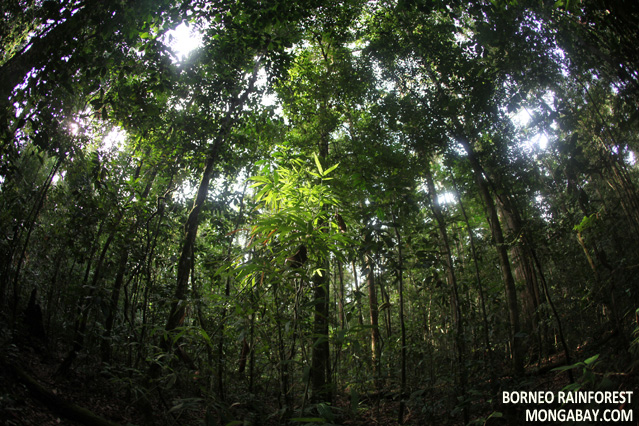 Continued / Next: Diversities of Image