|  Last updated July 30, 2012
Creepers, vines, and lianas (woody vines) are abundant in the canopy and make up a significant proportion of the vegetation in tropical rainforests. There are over 2,500 species of vines from about 90 families [liana distribution]. They range from small, indiscrete vines that grow against the tree to giant lianas thick as trees that seemingly hang in the middle of the forest independent of trees. Some of the larger woody lianas may exceed 3,000 feet in length. Rattan, a liana, is well known for its use in furniture and ropes. Rattan also produces large, edible fruits—a favorite of primates.

Lianas are vines that begin life on the ground as small self-supporting shrubs and rely on other plants to reach the light-rich environment of the upper canopy. Because lianas use the architecture of other plants for support, they devote relatively little to structural support and instead allocate more resources to leaf production and stem/root elongation for rapid growth. Since lianas are rooted throughout their lives (unlike other structural parasites like epiphytes and hemiepiphytes), they take nothing from the tree except support.

In a 2002 paper, Schnitzer and Bongers review some of the mechanisms lianas use to ascend to the heights of the canopy. "Lianas have a variety of adaptations for attaching themselves to their host and climb towards the forest canopy," say the scientists. "These adaptations include stem twining, clasping tendrils arising from stem, leaf and branch modifications, thorns and spikes that attach the liana to its host, downward-pointing adhesive hairs, and adhesive, adventitious roots . . . The relative proportion of lianas with different climbing mechanisms might be directly influenced by the successional stage or disturbance regime of the forest." Upon reaching the canopy, vines and lianas spread from tree to tree, and in some forests their leaves may make up 40 percent of canopy leaves.

Hemiepiphytes rely on a different strategy. These plants start life in the canopy as epiphytes and grow down to the ground. Hemiepiphytes grow extremely slowly due to dry conditions in the canopy but once the roots reach the ground and tap into the nutrients of the leaf litter, growth rates accelerate. One of the best known hemiepiphytes is the Strangler Fig.

Creepers are among the many rainforest species that change their leaf structure as they grow. The plants, especially those of the Araceae family, start as shrubs on the forest floor and gravitate toward dark objects, usually tree trunks. When they reach the tree, the climbers grow vertically up the tree held fast by the triangular flattened leaves. The leaves are positioned to catch reflected light. Once the vine reaches the bright upper regions of the canopy, the leaves are modified to grow away from the tree in order to intercept more direct sunlight.

Lianas are a huge problem for rainforest trees, and numerous species have developed means of discouraging their growth. Many palm and tree ferns regularly drop fronds, while other trees may lose limbs to rid themselves of lianas. Francis Putz, who studied Panamanian lianas, suggested it may be advantageous for trees to sway out of phase from their neighbors because this would tend to snap vine connections and kink lianas, cutting off transport systems. Some lianas have adapted to this mechanism by coiling and bending so they are spring-like and better able to absorb the shock.

Lianas play an important role in forest dynamics "including suppressing tree regeneration, increasing tree mortality, providing a valuable food source for animals, and physically linking trees together, thereby providing canopy-to-canopy access for arboreal animals." Schnitzer and Bongers (2002). Furthermore, lianas contribute to overall plant diversity in tropical forests (especially in and around light gaps and forest edges where lianas are notably abundant due to the increased availability of light). With their high photosynthetic production and sizable biomass, lianas also make a significant contribution to carbon sequestration.

In 2005, researchers made some surprising discoveries about lianas. Using data from 69 tropical forests worldwide, Stefan Schnitzer of the University of Wisconsin—Milwaukee (UWM) found that liana abundance is correlated negatively with precipitation and positively with seasonality, a pattern precisely the opposite of most other plant types. Schnitzer believes that the deep root and efficient vascular systems of lianas enable them to suffer less water stress during seasonal droughts while many competitors are dormant, giving lianas a competitive advantage during the dry season. The assistant professor of biology at UWM tested his hypothesis in central Panama and found that "lianas grew approximately seven times more in height than did trees during the dry season but only twice as much during the wet season." While this dry-season advantage may allow lianas to increase in abundance in seasonal forests, says Schnitzer, in wet rainforests with year-round rainfall, lianas gain no such advantage because competing plants are rarely limited by water. In a second study, Schnitzer teamed with Mirjam Kuzee and Frans Bongers of Wageningen University in the Netherlands to find that lianas play a substantial role in limiting the growth of saplings in disturbed and secondary tropical forests through below-ground (root) competition and above-ground (light) competition and mechanical stress.

Vines growing up the trunk of a canopy tree
(Malaysia)


OTHER PLANT AND ANIMAL RELATIONSHIPS

Canopy trees have coexisted with insects for millions of years and many have developed unique relationships beyond pollination. Myrmecophytes or ant-plants are common in the rainforest. For example in South America, the cecropia tree is colonized by azteca ants. The tree is segmented like bamboo, providing compartments for ant colonization. A queen establishes a nest in one of the hollow chambers, while other cells are inhabited by workers until the entire tree becomes a colony. The workers defend the plant from all invaders—including insects and epiphytes—although they do not attack the three-toed sloths which feed exclusively on the leaves of cecropia. The plant entices worker ants to stay and protect it by offering oil and sugars provided through leaf hairs and special structures at the base of the leaf stem.

Another example of ants and plants working together was documented in a 2005 paper by Stanford University researchers. The team found that Cedrela odorata, a species of cedar tree, is aggressively protected by ants (Myrmelachista schumanni) that clear all vegetation from the area surrounding the plant. So effective is the vegetation control around these trees that locals believe evil forest spirits are responsible for the clearings, called "Devil's gardens." The researchers determined that ants, not supernatural beings, kill surrounding plants by injecting a toxin called formic acid into the leaves. A single ant colony with as many as 3 million workers and 15,000 queens may tend a typical garden, which can be older than 800 years, according to calculations by the researchers.

Other plant species have similar relations with ants including some orchid species, bromeliads, Acacia, and Rubiaceae among others. To learn more about these ant-plant relationships check out http://biology.bangor.ac.uk/treborth/Epiphytes/Epiphytes-symbioses.html [external] and http://waynesword.palomar.edu/acacia.htm [external]

Many tree species have mechanisms and strategies to prevent burdensome epiphytes, which can add so much weight (especially when full of water after a rainstorm) that they topple the tree. The "naked Indian" or gumbo limbo tree [Bursera simaruba] of South America and the krystonia tree of Southeast Asia are among several species of tree that have peeling bark that prevents epiphytes and creepers from getting a hold or finding a suitable place to start growth. Other species produce toxins in their bark to ward off infestation by pests and to discourage the growth of epiphytes and lianas. 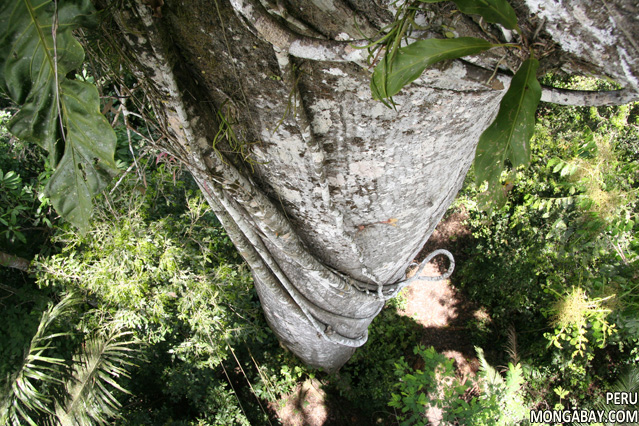 Roots from a strangler fig. (Photo by R. Butler)