The fall of a tree gives new opportunity to the hundreds of hardwood seedlings that have been waiting years in a state of dormancy for just such an occasion of increased sunlight. The saplings are able to persist in such an extended state of dormancy thanks to several adaptations that enable them to cope with the poor light conditions: the 1-5 percent of sunlight that reaches the forest floor is not typical sunlight, but has high proportions of long-wavelength red and infrared light. Many species have colored pigments better adjusted to harvesting energy from the altered light, while others have red undersides thought to improve light exposure by reflecting light back through the leaf so the tissue gets a double dosage of light. Interestingly, the leaves of saplings on the forest floor differ substantially from those of the canopy, even within the same tree. Canopy leaves are rarely equipped with dark undersides and are usually small and waxy to conserve moisture and protect leaf tissues from the strong sun. Conversely, the leaves of saplings are often large, soft, and non-moisture conserving. In addition, saplings have low rates of growth to conserve the few precious sugars they are able to manufacture. Over the course of a decade, a sapling in the full shade of the canopy may show virtually no noticeable growth. For this reason, forest dwellers cut saplings to make semi-permanent trails since they will not need to cut them again for some time. These trails are suitable to the rainforest because they inflict little environmental harm and are undetectable to most non-forest peoples who may wander into the rainforest. New leaves of both floor and canopy height trees are often bright red to discourage predators by warning them of the leaves' bitter taste or toxic qualities.

As previously mentioned, there are hundreds of tree saplings waiting for the opportunity to take the place of the fallen tree. When the saplings are touched by direct sunlight, they are stimulated to grow rapidly. Each sapling seeks to become the first to reach the canopy, since those that do not slowly perish under the shade of the newly formed canopy. 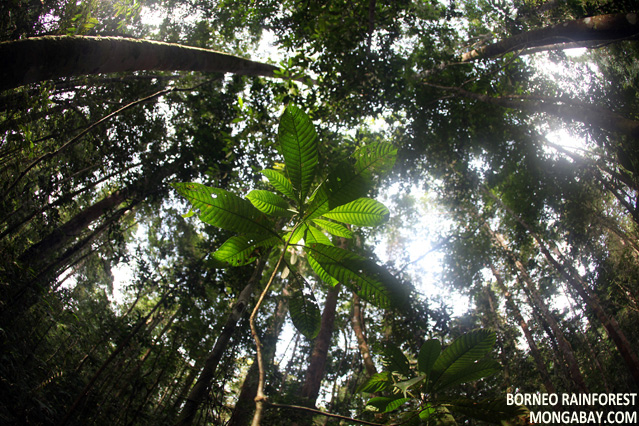 Seedling growing up from the forest floor in Borneo. Click image for more information. (Photo by R. Butler)

Other versions of this page