Tropical rainforests have some of the largest rivers in the world, like the Amazon, Madeira, Mekong, Negro, Orinoco, and Congo (Zaire), because of the tremendous amount of precipitation their watersheds receive. These mega-rivers are fed by countless smaller tributaries, streams, and creeks. For example, the Amazon alone has some 1,100 tributaries, 17 of which are over 1,000 miles long. Although large tropical rivers are fairly uniform in appearance and water composition, their tributaries vary greatly. Many tropical rivers and streams have extreme high and low water levels that occur at different parts of the year.

In addition to rivers, rainforests have conventional, free-standing lakes and so-called oxbow lakes, formed when a river changes course. These lakes are home to species adapted to the quiet, stagnant conditions.

Tropical waters, whether they be giant rivers, streams, or oxbow lakes, are almost as rich in animal species as the rainforests that surround them. But they, too, are increasingly threatened by human activities, including pollution, siltation resulting from deforestation, hydroelectric projects, and over-harvesting of resident species. Waterways off the Rio Negro in Brazil. (Courtesy of NASA) 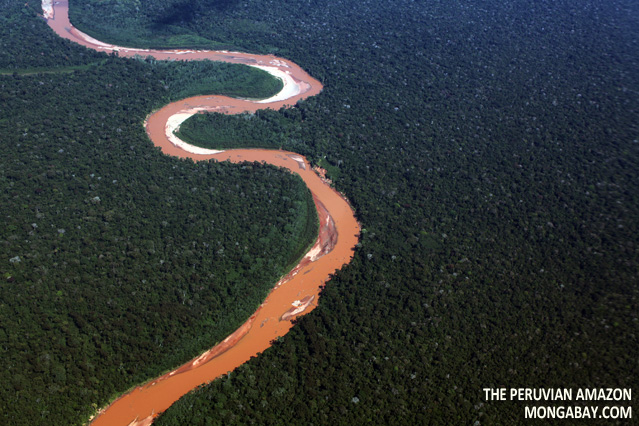