|  Last updated July 27, 2012
Throughout their existence, tropical rainforests have been affected by natural forces like fire, drought, and storms. These events occur on a random basis and can damage large stretches of rainforest. However, the damage caused by these natural occurrences is generally different from that caused by human activities; namely in that the forest loss is not complete and parts of the ecosystem continue to function. From the surviving remnants of the ecosystem, the forest can usually rapidly regenerate. Within a few years, the forest diversity can return to or exceed the diversity that existed before the disturbance. Some studies have suggested that these periodic occurrences are an important ingredient to a forest's diversity. Without these events, scientists believe, some forests cannot reach their fully dynamic state. Researches have found that forest turnover rates may be as short as 65-135 years.


Natural forest fires [news] occur in rainforests, despite their humid nature. Generally, when forest burns in smaller fires, ground vegetation, shrubbery, saplings, and smaller trees are eradicated, while the larger canopy species are spared. The fire has the effect of clearing the forest floor and weaker trees, thus allowing new growth.

A forest, stressed by drought or some other factor, is most susceptible to fire, usually sparked by lightening or small human fires that escape neighboring agricultural zones and burn out of control. For example, the great Bornean fires of 1982-83, destroyed more than 9 million acres (3.6 million hectares) of forest (2.81 million ha of dipterocarp forest) in Kalimantan (Indonesia). These fires, like the wildfires of 1997-98, was ignited by land-clearers setting fires in and around forest heavily degraded by logging under el Niño-induced drought conditions. Research has recently found that over half the Amazon rainforest is at risk of burning during extreme droughts, like the one that struck from July—November in 2005.

Volcanic eruptions and subsequent lava flows sometimes burn large tracts of forest, while the gases released from the activity can kill wildlife. An interesting phenomenon, documented by a National Geographic expedition in the Democratic Republic of the Congo's Virunga National Park, and undoubtedly in other areas with volcanic activity, involves carbon dioxide, a gas that is poisonous in high concentrations. Since carbon dioxide is heavier than air and tends to hug the ground, it forms deadly sink areas when released via volcanic vents. In these areas, green grass grows vigorously due to the abundance of C02 and the lack of herbivores, which are attracted to the untouched grass, but are quickly asphyxiated by the toxic gas. Other animals come, including predators attracted to the dead animals, but they, too, perish. The sink becomes a death trap. However, these carbon dioxide sinks are rare, so they do not pose a major threat to most animals. In 1999, lava flows in Cameroon destroyed sections of virgin rainforest, while there is evidence of large-scale lava damage in the rainforests of Costa Rica.

On Java, one of the last surviving tracts of lowland rainforest only exists today because of volcanic activity. When Krakatoa exploded in 1883, the resulting ash fallout and tsunami killed everyone living in the area that is now Ujung Kulong National Park. Fear of future calamity left the area uninhabited, allowing forest to regrow and providing the Javan rhino — the world's rarest rhino — a refuge on an island that has been nearly entirely converted for human use.

Drought [news] can affect forests by weakening the system to the point where it is more susceptible to other events like fire and disease. Drought is often partially induced by human activities like deforestation, but it is also a natural occurrence, like El Niño, which periodically causes drought in Asian and American tropical rainforests. El Niño is usually named as one of the influences behind the great Bornean fires of 1982-1983 and 1997-1998.

Drought initially weakens canopy plants by reduction of local humidity and rainfall. If the drought is long enough, the leaf litter dries out, killing off decomposers and reducing the effectiveness of nutrient recycling within the system as a whole.

However it is a different case in the years following El Niño events since dry, sunny El Niño events tend to alternate with wet, cloudy years in the tropics. In addition, high fruit production consumes stored reserves for plants, limiting the next reproductive event.

Many scientists are concerned that climate change could worsen droughts in the Amazon. In 2005, the accumulation of warm waters in the tropical Atlantic helped fuel a record hurricane season while reducing the availability of moisture to the Amazon basin. These conditions could worsen as global temperatures increase. Research published in December 2005 suggests that warmer sea temperatures in the tropical Atlantic are likely to become increasingly prevalent as currents normally carrying warm water from equatorial regions towards the Arctic weaken. One simulation by researchers at the University of Illinois, Urbana-Champaign, found that 45 percent chance that existing water currents in the North Atlantic Ocean could shut down by the end of the century if nothing is done to slow greenhouse gas emissions. Such a collapse of the so-called "Atlantic heat conveyor belt" could plunge parts of Europe into significantly colder winters while exacerbating drought conditions in equatorial Africa. Back in the Amazon, the usually moist rainforest could become drier and more susceptible to forest fires.

Storms can cause extensive damage in the rainforest through tree falls. When a canopy or emergent tree falls, dozens of other neighboring trees, attached by lianas, are brought down with it. Surveying the forest following a storm can reveal numerous tree falls, light gaps, and fallen matter including epiphytes and branches. However, a healthy forest can recover from moderate storm damage in a matter of months or years. The "light gaps" are quickly colonized and soon filled by canopy trees, while the fallen matter is decomposed and reabsorbed back in to the system.

Larger tropical storms, such as hurricanes (cyclones or typhoons), can cause substantial damage to rainforest and recovery may take decade to centuries. For example, in 1880 unusually strong winds damaged large areas of Kelantan forest in the northwestern part of peninsular Malaysia. A study in the 1950s found the most common tree species were still characteristic of secondary forest and dipterocarps—typical of southeast Asian rainforest—remained sparse. Similarly, recovery from Hurricane Hugo (1989) for the Luquillo montane forest in Puerto Rico is expected to take at least 250 years. 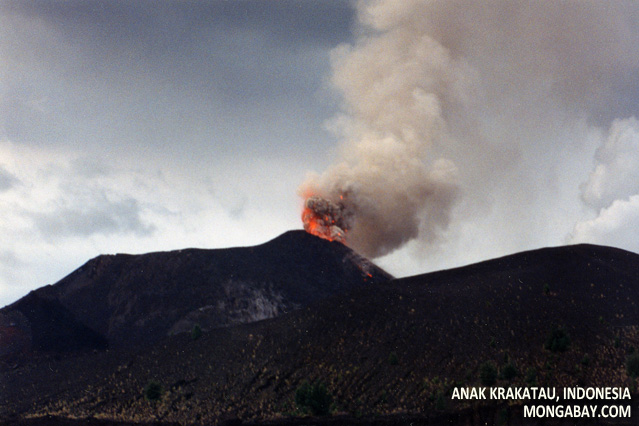 Continued / Next: Deforestation Threats from Humankind