|  Last updated July 27, 2012
Logging is one of the most prominent and best-known forms of rainforest degradation and destruction. Despite improved logging techniques and greater international awareness and concern for the rainforests, unsustainable logging of tropical rainforests continues—much of it practiced illegally by criminal syndicates.

In the late 1990s, after depleting much of their own timber stocks, Asian logging companies began aggressively moving into rainforest areas including northeastern South America (Guyana, Suriname); the Brazilian Amazon; the Congo Basin of Central Africa; the South Pacific, particularly the Solomon Islands and Papua New Guinea; and Central America. Chinese timber firms have been particularly active during that period and the early 2000s, after the government banned domestic logging in much of the country following catastrophic flooding in 1998. With a construction boom fueling demand for wood, China has been linked to logging in Africa, the Amazon, Burma, and Indonesia. However due to depletion of timber stocks, overseas timber operations in the 2000s and 2010s were increasingly replaced by plantation forestry, both timber and oil palm plantations.

Typical logging operations are quite damaging to the rainforest ecosystem. Problems stem from the nature of limited-term timber concessions, which encourage short-term resource depletion, and poor forest planning and management. Corruption is rife in many tropical timber-producing countries, making existing forestry laws nearly unenforceable, while lack of transparency in commercial transactions means that corrupt officials can grant concessions to cronies without regard for the environment or consideration of local people. The structure of the rainforest itself—where no one species dominates and attractive timber trees are widely dispersed—means that it can simply be more profitable to clear- cut forest. Even without clear-cutting, the construction of logging roads to reach forest resources is destructive in the its own right and encourages settlement of previously inaccessible forest lands by speculators, land developers, and poor farmers. Studies by the Environmental Defense Fund show that areas that have been selectively logged are eight times more likely to be settled and cleared by shifting cultivators than untouched rainforests because of the access granted by logging roads. Research has found a high correlation between the presence of logging roads and consumption of "bushmeat"—wild animals hunted as food.

Logging roads aside, selective logging itself—where only one or two valuable tree species are harvested from an area—can take a heavy toll on primary tropical forests. A late 2005 study conducted by scientists from the Carnegie Institution at Stanford University determined that "selective logging" creates twice as much damage as is detected by satellites while resulting in 25 percent more greenhouse gas emissions than previously believed.

Selective logging—as usually practiced—degrades forest because the felling of a single large tree can bring down dozens of surrounding trees which are linked to the target tree by vines and lianas. The thinning of the protective canopy exposes the forest to increased sunlight and drying winds that can kill symbiotic soil organisms essential for decomposition and nutrient-fixing, while drying leaf litter and increasing the forest's vulnerability to fire. Further, the use of tractors for removing trees tears up the soil and increases erosion. Selective logging has been found to reduce global biodiversity by destroying habitat for primary forest species.

These tropical logging operations widely fail to safeguard timber stocks for future harvests and fail to protect logged-over forest from fire, biodiversity loss, over-hunting, and subsequent conversion for agriculture or pasture. But the damage caused by clear-cutters is even worse. Operators who do not practice selective logging may instead simply burn a forest tract after valuable trees have been removed.

Developing countries often see only a fraction of the money generated legal logging operations, and even less from illegal logging, which, according to World Bank estimates, costs governments about US$5 billion in lost revenues annually and hits national economies for another US$10 billion per year. Logging firms can often find or create loopholes in legislation that allow them to pay very little for concessions while sometimes avoiding excise taxes on the logs they remove. For example, a 1994 logging agreement in Suriname granted 25 percent of Suriname's land area (7.5 million acres or 3 million hectares) at less than $35 an acre, while lacking provisions to safeguard the environment, reforest logged areas, or even allow the country to adequately monitor logging activities. Estimates at the time from the U.S. Forestry Service and Harvard Law School projected that while loggers would earn some US$28 million annually, the country would only see US$2 million. That logging contract was subsequently canceled due, in part, to public outcry.

Meanwhile, in the late 1990s, the Cambodian government was losing so much revenue from its failure to collect taxes on timber that the IMF canceled a $120 million loan and the World Bank suspended direct aid to the government until the corruption in the forestry sector was resolved. Apparently these actions were not enough to stem forest loss: between 2000 and 2005, Cambodia lost nearly 30 percent of its primary forest cover. In Nigeria, which suffered the highest rate of primary forest loss (55.7 percent) in the first half of this decade, WEMPCO, a Hong Kong logging firm, in the 1990s reportedly paid US$28 to the government for each mahogany tree while reselling the wood at US$800 per cubic meter, roughly US$2,900 per tree.

Tropical countries also lose potential revenue by exporting logs before processing, when wood has its lowest value. Several countries, including Cambodia, the Solomon Islands, and Burma, in the 1990s banned raw log exports in an effort to increase revenue for local operators and the government, but raw logs are still commonly smuggled by crime syndicates in several countries.

Sustainable forestry is possible, but according to the International Tropical Timber Organization (ITTO), more than 90 percent of tropical forests are managed poorly or not at all. Several techniques like strip logging and reduced impact logging (See Ch 10: Solutions: "sustainable logging") show potential, but do little good if they are not adopted. Further, studies have show that once logged, forest has a much higher likelihood of eventual deforestation due to road construction, increased risk of fire, and over-extraction of valuable species.

Rainforest logging operations are also particularly subject to "greenwashing" where a firm claims to be committed to sustainable harvesting techniques but in practice is failing to implement the most basic safeguards. 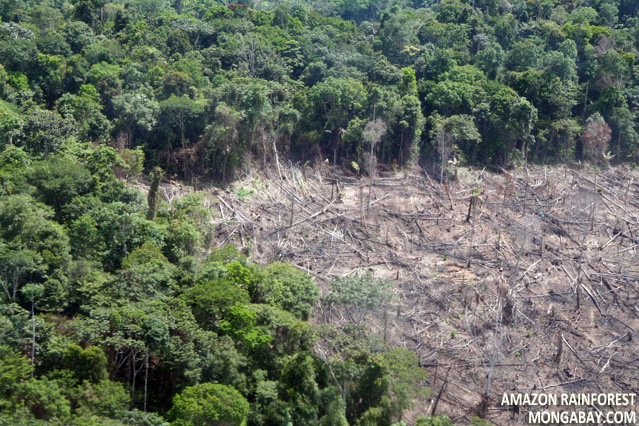 Clear-cutting in Peru near a gold mine. (Photo by R. Butler)

Continued / Next: Pulp and paper