ENVIRONMENTAL IMPACT OF MINING IN THE RAINFOREST

|  Last updated July 27, 2012
Gold, copper, diamonds, and other precious metals and gemstones are important resources that are found in rainforests around the world. Extracting these natural resources is frequently a destructive activity that damages the rainforest ecosystem and causes problems for people living nearby and downstream from mining operations.

In the Amazon rainforest most mining today revolves around alluvial gold deposits. Due to the meandering nature of Amazon rivers, gold is found both in river channels and on the floodplains where rivers once ran. These deposits are actively mined by large-scale operators and informal, small-scale miners. Both operators rely heavily on hydraulic mining techniques, blasting away at river banks, clearing floodplain forests, and using heavy machinery to expose potential gold-yielding gravel deposits. Gold is usually extracted from this gravel using a sluice box to separate heavier sediment and mercury for amalgamating the precious metal. While most of the mercury is removed for reuse or burned off, some may end up in rivers. Studies have found that small-scale miners are less efficient with their use of mercury than industrial miners, releasing an estimated 2.91 pounds (1.32 kg) of mercury into waterways for every 2.2 pounds (1 kg) of gold produced.

While there is no scientific consensus on mercury contamination in the Amazon, according to biologist Michael Goulding, there is evidence of mercury causing problems in other ecosystems. Elemental or inorganic mercury can be transformed (methylated) into organic forms by biological systems and enter food chains. Not only are methylated mercury compounds toxic, but highly bioaccumulative, meaning that mercury concentrations increase up the food chain. Top predators, including otters, birds of prey, and humans, will have the highest levels of mercury in their systems. Those who eat large amounts of fish are at the greatest risk.

Other toxic compounds are used and generated in the mining process as well. Mining exposes previously buried metal sulfides to atmospheric oxygen causing their conversion to strong sulfuric acid and metal oxides, which run off into local waterways. Oxides tend to more soluble in water and contaminate local rivers with heavy metals.

Cyanide, a highly toxic compound, is also often used to separate gold from sediment and rock. While cyanide is supposed to be carefully monitored to prevent its escape into the surround environment, spills do occur—especially when there's no one around to enforce mining regulations. The effects of poisoning can be widespread, especially when a waste-holding pool overflows or breaks, as it did in Guyana in August 1995.

The Guyana spill made international headlines for its magnitude—over one billion gallons (four billion liters) of cyanide-laced waste water was released into a tributary of the Essequibo— and its effects, causing widespread die-offs of aquatic and terrestrial plant and animal life, poisoning floodplain soils used for agriculture, polluting the main source of drinking water for thousands of people, and striking a blow to the emerging eco-tourism industry on the river. The mine, run by Golden Star Resources of Denver and Cambior of Montreal, at first tried to cover up the spill by burying fish carcasses. Six days after the spill, after locals found dead wildlife, the mine reported the accident to the Guyana government. Despite the damage inflicted by the spill, the government granted additional mining concessions on the New River shortly thereafter.

Large-scale mining operations, especially those using open-pit mining techniques, can result in significant deforestation through forest clearing and the construction of roads which open remote forest areas to transient settlers, land speculators, and small-scale miners. These settlers and miners are probably a greater threat to the tropical rainforest environment than industrial mining operations. Wildcat miners enter regions rumored to have gold deposits and clear forest in search of riches. They hunt wildlife, cut trees for building material and fuelwood, and trigger erosion by clearing hillsides and detonating explosives. Miners can also bring diseases to local indigenous populations (where they still exist) and battles over land rights. One well-documented example is the conflict between the Yanomani Indians of Northern Brazil and Venezuela and garimpeiros—illegal Brazilian miners. Reports indicated that Yanomani populations have fallen significantly since the first incursion of miners in the 1980s. 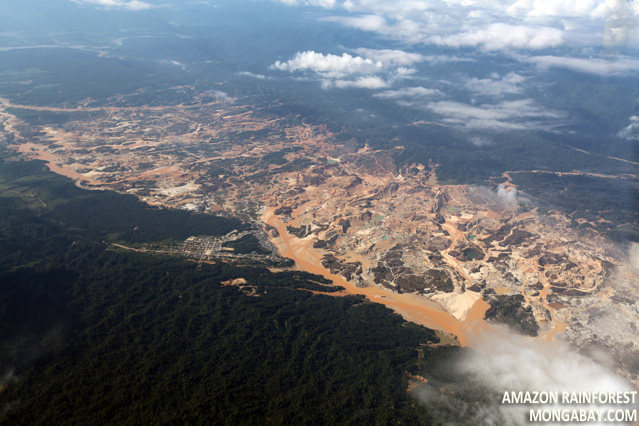