FIRES IN THE RAINFOREST

|  Last updated July 27, 2012
Rainforests are increasingly susceptible to forest fires today due to degradation from selective logging, fragmentation, and agricultural activities. Scientists are concerned that much of the Amazon is at risk of burning, and that in the future we could see fires similar to those that so damaged Indonesia in recent el Niño years.

Today most rainforest fires originate in nearby pasturelands and agricultural fields where fires are used for land clearing and crop maintenance. Every year, during the burning season, tens of thousands of fires are set by land speculators, ranchers, plantation owners, and poor farmers to clear bush and forest. Under dry conditions these agricultural forests can easily spread into neighboring rainforest.

Low-level fires in the rainforest are not unusual. Even in "virgin" forests, fires may burn across thousands of acres of forest during dry years. The distinction between these fires and the fires that forests are increasingly experiencing today is the frequency of occurrence and level of intensity. Natural fires in the Amazon generally do little more than burn dry leaf litter and small seedlings. Typically these fires have flames that only reach a few inches in height and have virtually no impact on tall trees or the canopy itself. However, in passing, the fire sets the path for recurrent fires and subsequent forest loss. Once-burned forests are twice as likely to be deforested as unburned forests, largely because the initial fires—however small—thin out the canopy, allowing more desiccating sunlight to reach the forest floor. Previously burned forests, in addition to having more combustible material, are also often adjacent to fire-maintained pastures and therefore are frequently exposed to sources of ignition. Subsequent fires burn with increased velocity and intensity and cause higher tree mortality. Fires intervals of less than 20 years may eliminate all trees in the forest stand.

Under "normal" rainfall and humidity conditions most of these fires are extinguished by the arrival of the rainy season or monsoon. Usually virgin forests serve as a sort of humid barrier which prevents the spread of agricultural fires. However, under dry conditions—such as those of an el Niño year—fires can spread from pastures and fields into primary forest. In the 1990s, 90 percent of burning in the Brazilian Amazon occurred in El Niño years.

The unusually strong El Niño of 1997-98 contributed to massive forest fires. In the Amazon, humidity in the Basin was 45-55 percent lower than usual and the Woods Hole Research Center estimated that 400,000 square kilometers of forest could go up in smoke during the burning season.

In early 1998, some of these fears materialized as 13,200 square miles (34,000 square km) of Roraima state in northern Brazil burned. The fires, started by subsistence farmers, spread rapidly across the dry savanna and advanced into rainforest usually too humid to burn. As many as 3,800 square miles (10,000 sq km) of intact rainforest were damaged or destroyed by these fires. The government firefighting efforts had virtually no effect and it was only freak heavy showers that extinguished the flames.

Dry conditions again returned in 2005, when the Amazon experienced the worst drought in recorded history. As rivers went dry and communities were left stranded, tens of thousands of fires burned. That calamity was topped in 2010 by an even worse drought that affected a million square kilometers of Amazon forest. In both of these droughts, dry conditions were linked not to El Niño but to warm temperatures in the tropical Atlantic Ocean, raising fears that climate change could worsen droughts in the Amazon.

Besides destroying the rainforest ecosystem and killing wildlife, these fires create other environmental problems. The "burnings" release thousands of tons of carbon into the atmosphere and the smoke produced causes local airport closings and hospitalizations for smoke inhalation. These fires are significant sources of greenhouse gases. For example, in a four-month period (July-October) in 1987, about 19,300 square miles (50,000 sq. km) of the Brazilian Amazon burned in the states of Para, Rondonia, Mato Grosso, and Acre. The burning produced carbon dioxide containing more than 500 million tons of carbon, 44 million tons of carbon monoxide, and millions of tons of other particles and nitrogen oxides.

The tropical forest fires that have made headlines of late will only worsen as more forest is degraded and the area of previously burned forest expands. A study by IMAZON (the Institute for Man and Nature in the Amazon) found that for every acre burned or cleared which shows up on satellite, at least one-acre burns undetected under the forest canopy. These leaf-litter fires can burn for months with warm temperatures and little rain, and subsequent fires in these previously burned areas are more intense and destructive.

Other studies have warned that climate change could significantly dry forests in the Amazon Basin and Africa, increasing their risk of burning. In light of this potential scenario and to better understand the impact of extended drought in the Amazon and the resilience of the forest to fire, the Woods Hole Research Center and NASA are have conducted an extensive series of large-scale experiments in the Brazilian rainforest. Separate findings from NASA suggest that heavy smoke from Amazon forest fires inhibits cloud formation and reduces rainfall. This conclusion, combined with other NASA studies suggesting that deforestation can affect regional climate, means that the Amazon rainforest may be on the verge of a significant environmental transformation—one that will increasingly leave the ecosystem vulnerable to fire. 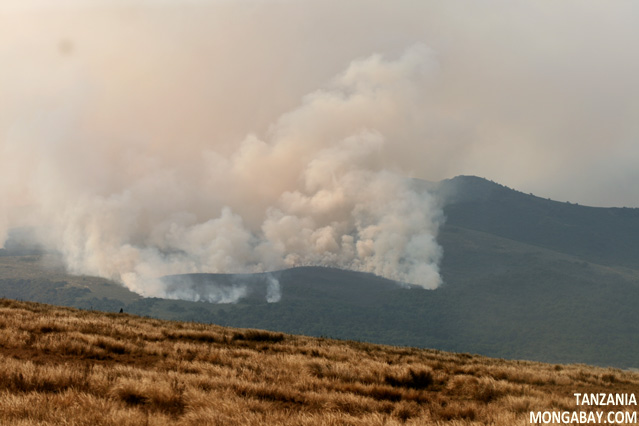