|  Last updated July 27, 2012
Humans have long hunted wild game from forests, but over the past 50 years commercialization of killing has triggered a rapid increase in wildlife depletion. Hunting and poaching cause damage to the rainforest ecosystem by removing species key to the system's functioning. The loss of a certain single species can mean extinction for many others.

Hunting of seed dispersers and pollinators can influence the structure of a forest. According to research from Central Africa, heavy bushmeat hunting alters forest composition by favoring small-seeded trees over large-seeded, leading to lower tree diversity of trees that have big seeds.

The wildlife harvest takes a staggering number of animals: every year in the Brazilian Amazon alone, where 9.6 to 23.5 million mammals, birds, and reptiles are harvested. The annual harvest in the tropical forests of Africa may be 6-12 times that amount, since illegal poaching in Africa is rampant to provide meat for poor rural and urban dwellers.

In Asia, tiger populations have been dramatically reduced due to widespread habitat loss and Chinese demand for traditional medicinal products made from tiger parts. Endangered Sumatran elephants are increasingly poached for their ivory and could go extinct within 50 years at present hunting rates. In Indonesia, where there is a thriving black market for endangered wildlife, orangutans are suffering from both habitat loss and the illegal trapping of baby orangutans for the pet trade. Typically, mother orangutans are killed since they refuse to abandon their young.

In Brazil, Colombia, Nigeria, Madagascar, and other countries, the collection of wild animals for the pet trade takes its toll on local animal populations. Although such collection can be done in a sustainable manner, it rarely is. Reptiles are the fourth biggest commodity after drugs, diamonds, and weapons in the world smuggling trade, but losses are quite high: less than 10 percent of all animals exported illegally make it alive to their final destination—usually a small, dirty terrarium.


While not directly responsible for deforestation, the introduction of foreign plants and animals can cause severe damage to rainforests, especially in delicate ecosystems like islands. These feral species bring new diseases and compete with local species.

The bird life of Guam and Hawaii has suffered from the introduction of alien species [Invasive species news]. In the case of Guam, the culprit was a snake, while in Hawaii the mosquito and domestic chickens were responsible for the decline of native birds. Since the arrival of the Polynesians, at least 62 endemic bird species have disappeared from Hawaii. It is even more startling that Hawaii has more alien plant species than native ones. Alien weeds can choke out endemic plants, especially under disturbed forest conditions like agricultural clearing.

Additionally, alien species can wipe out endemic keystone species that play an important role in the ecosystem, like pollinating certain tree species. The elimination of such an endemic species can spell the end for the tree species and a host of other dependent plant and animal species.

Climate change is expected to increase the number of alien species in some ecosystems. 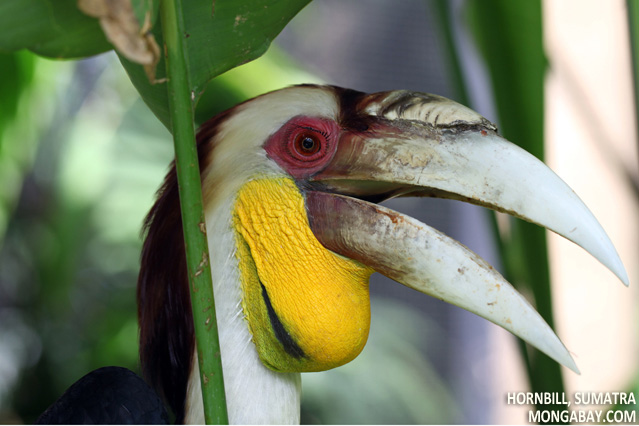 Wreathed Hornbill (Rhyticeros undulatus). Hornbills are important seed dispersers in many forests yet they are often targeted by hunters. Click image for more photos of hornbills. (Photo by R. Butler)