|  Last updated July 31, 2012
In the 1980s, 1990s, and early 2000s, debt was driving commercial deforestation in some developing tropical countries, especially those classified as Heavily Indebted Poor Countries (HIPCs). Strapped for cash, these countries turned toward their natural resources as the fastest and easiest way to service debt and interest payments. Readily available without capital investment or skilled labor, often non-renewable, forest products like mineral wealth, timber, oil, and hydroelectric power were liquidated in an effort to raise much-needed funds.

While efforts in the last decade have sought to reduce or eliminate debts of the world's poorest countries (World Bank / IMF), debt payments still are an important factor in the need for governments to pursue and exploit natural resources an unsustainable manner.

The origin of international debt varies from country to country, but many borrowed heavily during the 1970s in an attempt to offset the rising price of oil and to keep their economies growing. Other debts were initiated by struggles for independence and civil wars that followed. Debt increased with the reign by corrupt, heavy-handed governments, which at times used loans to purchase weapons or to finance wasteful or ill-conceived projects that neither benefited the majority of the population, the economy, nor the environment. High interest rates coupled with the global recession made it harder for developing countries to pay off debt.

Historically, much of the foreign aid flowing into such countries from multilateral lending organizations like the World Bank and the International Monetary Fund (IMF) financed projects that result in the destruction of the rainforests and thus further ensured future impoverishment and dependence on aid. These organizations funded such projects because they were best suited to large development projects.

However since the mid-2000s, drivers of debt having been changing. Today it is private sector investment that has been pushing commercial exploitation of forests. In some countries like Brazil, state-run banks and development institutions play an important role in financing activities that have a major impact on forests. Accordingly, NGOs and environmentalists have been targeting these entities in an effort to push them to adopt lending safeguards. For example, BNDES, Brazil's massive development bank, and the state-run Banco du Brasil now offer reduced interest loans for farmers and ranchers who prove compliance with national environmental laws.

The financial sector — whether it is state-run banks, multilateral development banks, of private financiers — play a fundamental role role in funding projects that drive deforestation and forest conversion. 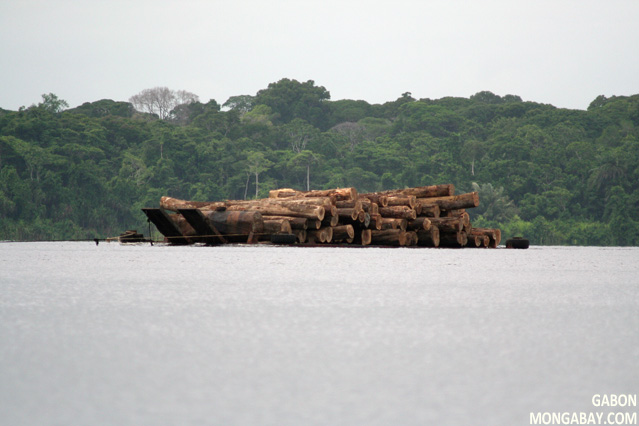 Timber being transported in Gabon. (Photo by R. Butler)