SUSTAINABLE AGRICULTURAL DEVELOPMENT IN THE TROPICS

|  Last updated July 22, 2012
In seeking a "solution" to deforestation of tropical rainforests—whether it be through debt-for-nature-swaps, extractive reserves, selective logging, ecotourism, or another strategy—the ultimate fate of forests rests in the hands of local people. While some would argue that rainforests can be "saved" by restricting economic growth, it is necessary to realize that parks and reserves will not persist unless local communities are persuaded that it is in their material interest to conserve.


For thousands of years tropical rainforests have been managed to sustain productive agriculture and at times to support dense human populations. It is estimated that more land was under cultivation in the Amazon on the eve of the arrival of Columbus than is today. Studies suggest that perhaps 12 percent of Amazonian terra firme (upland) forests are "anthropogenic in nature, resulting from prolonged management by prehistoric populations." The fact that certain forms of agriculture are possible is a vital consideration for the sustainable, economic development of tropical rainforests.

Rainforests have a long history of disturbance by humans who promoted areas of concentrated diversity of useful species within a diverse landscape. Without undermining the ecological basis of production, Indigenous communities promoted the abundance of certain valuable species by creating conditions favoring their growth and development. They fostered palm forests, groves of Brazil nuts and fruit trees, and vine forests near ancient Amazonian settlements (past settlements are marked by the presence of pottery and anthropogenic "black soils"). These vegetation types have species useful for everyday life.


Today we can incorporate the techniques of Indigenous peoples into agricultural projects in the rainforest to increase the productivity of degraded forest lands and promote sustainable use of forest resources. Through agroforestry and floodplain orchards, outright destruction of rainforests can be avoided, while improving economic efficiency and providing a source of income for rural poor.

Roughly a third to two-fifths of rainforest deforestation is caused by the shifted cultivator, who is usually pushed to marginal lands by lack of other suitable land. In some areas these farmers may be forced into the forests as a result of population growth and by landowners who hold large tracts of farmland. In many countries, wealthy landholders—who have the most political clout—control the most productive lands, leaving the small farmers little choice but to clear a homestead from the forest. For example, in Brazil, 10 percent of the population owns almost 90 percent of the fertile land. In many countries, the politically expedient way of dealing with this skewed land distribution has been to open up "unused" wildlands for poor farmers, rather than confront large landowners.

Some argue that some form of agrarian land reform is the best way to attack forest loss caused by "swidden agriculture." Land reform may turn some productive land over to poor farmers and be accomplished by reducing subsidies granted to large landowners for leaving tracts of their land uncultivated.

An additional, potentially complementary, approach to addressing the needs of the shifted cultivator and agriculturist alike is improving and intensifying currently existing agricultural projects and promoting alternative cultivation techniques—notably agroforestry—based on those used by Indigenous forest dwellers. Many cleared forest areas used for agriculture and now in decline can be salvaged by cultivation techniques that loosely mimic the diversity of the surrounding rainforest. In other words, polycultural fields—patchworks of perennial crops, annual crops, pasture land, secondary growth, and forest—could be the key to increasing agricultural productivity and reducing destruction in many rainforests.

Historically, agriculture in the Amazon rainforest has had a highly dynamic nature whether it be on a grand scale or at a subsistence level. Today a good deal of rainforest agriculture consists of monocultures (single crop fields) of annual crops, which must be replanted on a regular basis to sustain yields. Poor tropical soils quickly wear out under a regime of annuals, and fertilizers must be added or additional forest cleared if growth is to continue.

Many forest dwellers instead focus on perennials—crops which continue to produce for a number of years like citrus, manioc, vanilla, banana, mango, pepper, cacao, coffee, and rubber—as the basis of their agricultural techniques. Instead of continually clearing new sections of forest, these cultivators plant perennials or a mixture of perennials and annuals on their patch of land. Perennials can help restore nutrients to degraded soils, and they remain productive for decades, bringing a steady stream of cash to needy farmers.

A mixture of perennials and annuals often works best for small agricultural plots because such polycultural fields provide a diversified income (prices of many cash crops are notoriously volatile), as well as insurance if one crop fails. The home gardens of many forest dwellers are one form of agriculture well-suited to the rainforest environment. These diverse agroforestry systems provide a wealth of plant species—both local and foreign, since tropical plants like mango, pineapple, manioc, papaya, and orange have almost cosmopolitan distribution today. These species are also useful in everyday life. Home gardens can serve as a living pharmacy and a local hardware store, while providing shade for humans and livestock, foods for the kitchen, and ornamentals. Many home gardens contain remnants from old-growth forest in that useful forest trees (like Brazil nuts) are often left standing when clearing a homestead.

An added bonus of such agroforestry systems is that they maintain forest systems, soils, and biological diversity at a far higher level than do industrial agricultural techniques. As long as such fields are adjacent to secondary and old-growth forest, many species will continue to thrive. Growing crops like coffee, cocoa, bananas, and vanilla in the shade of canopy trees preserves more biodiversity than standard cultivation techniques. In recent years, "rainforest-friendly" coffee has gained popularity and is now heavily promoted in some parts of the United States. Polycultural fields also recover considerably faster than conventional fields when they are abandoned, because forest systems are maintained, including hydrological cycles, nutrient recycling, and seed dispersal.

Additionally, seed banks in the soil persist and crop trees provide shade necessary for canopy tree-seed generation, allowing a relatively smooth transition to secondary forest once the farmer moves on to a new area.

Despite all these positives, sustainable agriculture faces several hurdles in reaching widespread acceptance. Agroforestry and other forms of reduced-impact agriculture are more attuned to the ecological realities than most forms of agriculture in the rainforest, but they must also be attuned to economic realities. For example, many migrants to the rainforest are ignorant of such cultivation methods. Instead—assuming they even know anything of agricultural techniques—they often rely on what works in different climates and soil conditions—methods that typically fail on cleared rainforest lands. Thus, one major challenge in promoting agroforestry is overcoming the ignorance of people who may have migrated to forest areas from cities about farming techniques that are effective in tropical areas. A second obstacle is the lack of access for many rural poor. Without means to transport their goods to market or even a market for their goods, locals have little chance of turning a profit for their labor. Another issue is a general lack of credit facilities from which poor farmers can borrow in times of need. Overcoming these obstacles—whether through improvement of existing roads, education systems, microfinance, or other means—will bring us much closer to resolving the shifted-cultivator problem.

Agroforestry techniques can be applied on a larger scale using corridors of forest and a mixture of perennials and annuals. While management and harvesting costs generally increase, these negatives could be outweighed by the value of income diversification, soil protection, maintenance of forest functions, and preservation of biodiversity. Sustainable agriculture is one of many means that can offer economic survival to landless poor and industry. Sustainable development through harvesting of the forests' renewable resources has potential for saving rainforests by providing tangible returns in the short run. 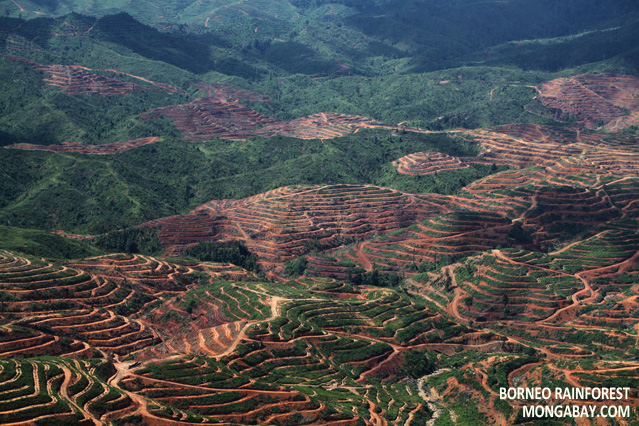