|  Last updated July 22, 2012
Plants have broader uses than as just food and a genetic reservoir. Increasingly, rainforest plants, and to a lesser extent rainforest animals, are the source of compounds useful for medicinal purposes.

The rainforest has been called the ultimate chemical laboratory with each rainforest species experimenting with various chemical defenses to ensure survival in the harsh world of natural selection. They have been synthesizing these compounds for millions of years to protect against predators, infection, pests, and disease. This makes rainforest species an excellent reservoir of medicines and chemical templates with which researchers can create new drugs.

Rainforest plants have already provided tangible evidence of their potential with remedies for a range of medical problems, from childhood leukemia to toothaches. Seventy percent of the plants identified as having anti-cancer characteristics by the US National Cancer Institute are found only in the tropical rainforest. Some examples of rainforest plants responsible for 25 percent of the drugs used by Western medicine are included in this table.

Despite all their promise, fewer than 10 percent of tropical forest plant species (and 0.1 percent of animal species) have been examined for their chemical compounds and medicinal value. Once a plant with the desired qualities is discovered, it is rigorously analyzed for its chemical structure, then goes through clinical trials for effectiveness and safety before getting final approval from the US FDA. Nevertheless, using rainforest species for derivation and synthesis of medicinal compounds, is becoming a mainstream process. In 1983 there were no U.S. pharmaceutical firms involved in research on such plants. Today there are well over 100 corporations, and U.S. government agencies are studying rainforest plants for their medicinal capacities.

One such organization, the U.S. National Cancer Institute, maintains screening of rainforest species for anti-cancer and anti-HIV effects. Because there are so many plant species, researchers concentrate on close relatives of plants already known to produce useful compounds. Another method is to choose plants that display characteristics indicating they have an effect on animals, like deterring insect pests. Many chemicals toxic to insects show bio-activity in humans meaning they may have drug promise.

Indigenous uses of plants can also offer hints of potentially useful plants. For thousands of years, indigenous groups have extensively used rainforest plants for their health needs. They have experimented with a wide range of plants. The peoples of Southeast Asian forests used 6,500 species, while Northwest Amazonian forest dwellers used at least 1,300 species for medicinal purposes. The success rate for discovering medicinal plants with traditional uses is high because rainforest peoples, notably shamans, have been experimenting with various combinations and dosages for generations. A 1990s study in Samoa found that 86 percent of the plants used by local healers yielded biological activity in humans.

The National Cancer Institute can rapidly screen compounds for activity against 60 cancer types. When the compound shows promise, chemists isolate the molecules responsible for the activity and then compare the molecular structure with that of known chemicals. Sometimes the molecule already has been identified, but is not used medicinally; at other times the molecule will be altered to produce the desired action. If the molecule has potential as a drug, it is tested for certain characteristics including safety, effectiveness, and side effects. If it passes those tests, a corporation or government agency must finance bringing the drug to market—a process that costs more than $800 million and may take a decade or more. Before reaching the public market, the drug must go through rigorous clinical trials. According to the Global Bioscience Development Institute, for every 10,000 to 20,000 compounds screened for possible activity in the basic-research stage, about 250 make it as far as pre-clinical testing. Of those, five drug candidates make it as far as clinical trials, and only one becomes an actual FDA-approved drug. Thus the process of bringing a rainforest drug, or any pharmaceutical product, to market is long and costly.

Nevertheless, commercial sales from such drugs can generate huge sums: the two chemicals derived from rosy periwinkle bring in revenues of US$160 million per year. Large companies usually benefit the most from such projects while the local peoples and shamans get little in return. For example, virtually no money from the Vincristine (Oncovin) and vinblastine derived from the rosy periwinkle made it back to the country of origin, Madagascar. However, once the drug patent expired, Madagascar was able to begin exporting tons of crude periwinkle annually.

In the past such exploitation, known as biopiracy, was the rule. While drug companies raked in millions in revenue, the community that found the plant producing the drug was left with token baseball hats, beads, or aspirin as compensation. One of the biggest biopiracy coups occurred last century when the British smuggled (at least Brazilians allege) rubber tree seeds out of Brazil to their colony of Malaysia, ending the lucrative Amazonian monopoly on rubber.

In the 1990s a bitter patent battle has erupted between an American entrepreneur and COICA, an organizations representing indigenous peoples from the Amazon region, over ayahuasca or yagé. Yagé is a celebrated hallucinogenic, derived from a rainforest liana (Banisteriopsis caapi) and other plants, which is used ceremonially by Amazonians. The biopiracy incident was initiated in 1986 when American Loren Miller visited Ecuador and took a sample of yagé without permission and then acquired a patent from the U.S. government. Miller subsequently launched the International Plant Medicine Corporation to commercialize yagé for psychiatric and cardiac pharmaceuticals. COICA argued Miller had no right to patent a plant compound that has been used for generations by indigenous peoples. Complicating the debate was the refusal of the U.S. Senate to ratify the UN Convention on Biodiversity, which has been ratified by more than 100 countries including Ecuador, where the Yagé sample was acquired. The UN agreement includes the recognition of intellectual property rights of indigenous peoples. The U.S. Patent Office (USPTO) eventually overturned the patent in 1999, only reinstating it in 2001. The patent expired in 2003.

This exploitation without compensation has been the historical trend, although today there is more awareness on the need to consult with indigenous practitioners and ensure that benefits reach local people. Most tropical countries lack the expertise to identify, develop, and commercialize drugs derived from rainforest plants, so drug research and development will likely continue to be dominated by industrialized countries. However compensation for the country of the product's origin must be addressed if the sources of these products —the tropical rainforest—are to be preserved.

Several pharmaceutical companies have agreed to share revenues with local people. The drug Prostialin, isolated in 1984 from a Samoan rainforest tree, has exhibited strong activity against HIV in tests. With its discovery, the National Cancer Institute has guaranteed that part of the royalties from the sale of the drug will be returned to the Samoans. As a result, Samoa fiftieth national park was established to encourage local healers to use medicinal plants in a sustainable way, in order to pass their knowledge on to the next generation. Similarly, in 1991, Merck and Company invested $1 million in Costa Rica's National Biodiversity Institute (INBio) to assist in a cataloging and screening effort. The institute collects and identifies organisms, sending samples from the most promising species to Merck laboratories for medicinal assay. If the compounds prove useful and the resulting drugs make it to market, the Costa Rican government is guaranteed some of the royalties, which will be set aside for conservation projects. 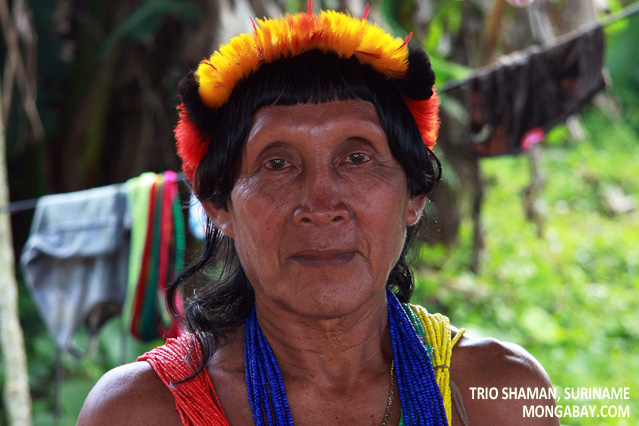