Brazil holds about one-third of the world's remaining rainforests, including a majority of the Amazon rainforest. Terrestrially speaking, it is also the most biodiverse country on Earth, with more than 56,000 described species of plants, 1,700 species of birds, 695 amphibians, 578 mammals, and 651 reptiles.

The bulk of Brazil's forest cover is found in the Amazon Basin, a mosaic of ecosystems and vegetation types including rainforests (the vast majority), seasonal forests, deciduous forests, flooded forests, and savannas, including the woody cerrado. This region has experienced an exceptional extent of forest loss over the past two generations—an area exceeding 760,000 square kilometers, or about 19 percent of its total surface area of 4,005,082 square kilometers, has been cleared in the Amazon since 1970, when only 2.4 percent of the Amazon's forests had been lost. The increase in Amazon deforestation in the early 1970s coincided with the construction of the Trans-Amazonian Highway, which opened large forest areas to development by settlers and commercial interests. In more recent years, growing populations in the Amazon region, combined with increased viability of agricultural operations, have caused a further rise in deforestation rates. 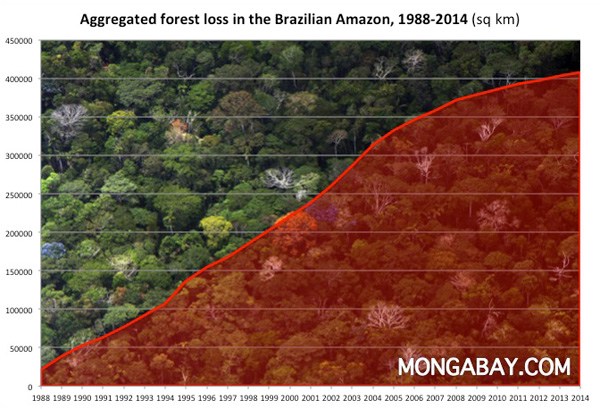 Aggregated deforestation in the Brazilian Amazon from 1988-2013


Recent studies indicate that these figures do not include extensive areas degraded by fires and selective logging. Research led by the Woods Hole Research Center and the Carnegie Institution's Department of Global Ecology found that each year the amount of forest degraded is roughly equivalent to the amount of forest cleared. The finding is trouble to ecologists because degraded forest has lower levels of biodiversity and is more likely to be cleared in the future. Further, degraded forest is more susceptible to fires. 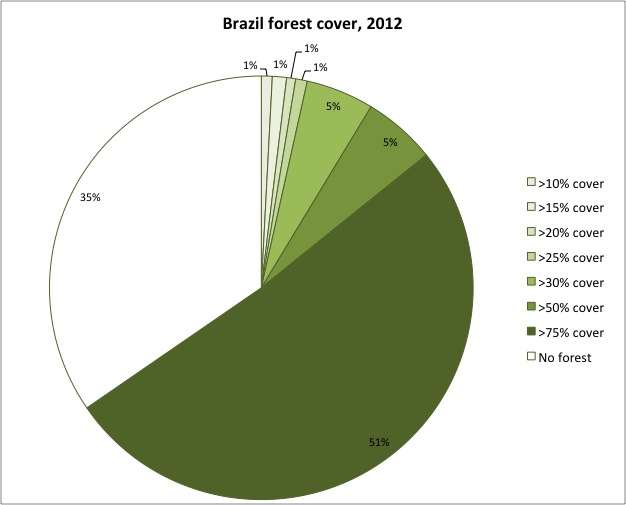 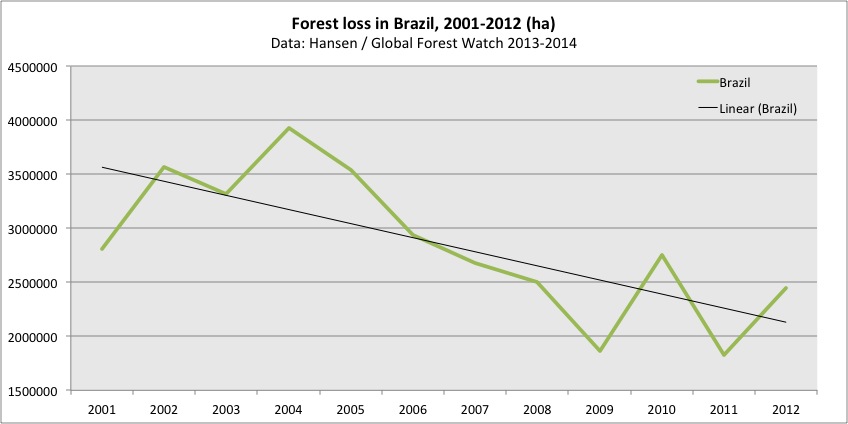 Why is the Amazon Rainforest Disappearing?

Historically the majority of deforestation has resulted from the actions of poor subsistence farmers, but in recent decades this has changed, with a greater proportion of forest clearing done by large landowners and corporations. Such is the case in Brazil, a large portion of deforestation can be attributed to land clearing for pasture by commercial and speculative interests.

Since 2004 the rate of deforestation in the Brazilian Amazon has fallen nearly 80 percent to the lowest levels recorded since annual record keeping began in the late 1980s. Importantly, this decline has occurred at the same time that Brazil's economy has grown roughly 40 percent and agricultural output has surged, suggesting a decoupling of economic growth from deforestation.

While this is welcome news for Earth's largest rainforest, there remains a risk that the trend could reverse. Furthermore, scientists worry that rising temperatures and increased incidence of drought are increasingly the vulnerability of the Amazon rainforest to catastrophic die-off.

Causes of deforestation in the Amazon

In evaluating deforestation in the Amazon, it is important to understand both direct and indirect drivers of forest loss.

Direct drivers of deforestation including conversion of forests for pasture, farmland, and plantations, as well as surface mining, dams that inundate forested areas, and intense fires. Conversion of rainforest for cattle pasture is the single largest driver of deforestation in Brazil. Clearing forest for pasture is the cheapest and easiest way to establish an informal claim to land, which can then be sold on to other parties at a profit. In some parts of the Brazilian Amazon, cleared rainforest land can be worth more than eight times that of land with standing forest. According, cattle ranching is often viewed as a way to speculate on appreciating land prices.

However since 2000, cattle ranching in the Amazon has become increasingly industrialized, meaning that more ranchers are producing cattle to sell commercially. Most of the beef ends up in the domestic market, but secondary products like hides and leather are often exported.

These exports left Brazilian cattle ranchers exposed in the late 2000's when Greenpeace launched a high profile campaign against companies that were sourcing leather and other products from major Brazilian cattle processors. That campaign led major companies to demand zero deforestation cattle. Combined with a crackdown by public prosecutors, the Brazilian cattle industry started to shift substantially toward less damaging practices in late 2009, contributing to the downward trend in deforestation.

The model for the Brazilian cattle industry to move toward zero deforestation came from the country's soy industry, which underwent a similar transformation three years earlier. That shift was also initiative by a Greenpeace campaign, which targeted the soy-based chicken feed used by McDonald's in Europe. Within months of that campaign's launch, the largest soy crushers and traders in the Amazon had established a moratorium on buying soy produced via deforestation in the Amazon.

Logging in the Brazilian Amazon remains plagued by poor management, destructive practices, and outright fraud. Vast areas of rainforest are logged -- legally and illegally -- each year.

At present, Amazon palm oil is not a major driver of deforestation in Brazil. The industry may in fact offer a more productive alternative to other land use in the region, if low productivity cattle pastures are instead converted into plantations.

Dams, roads, and other infrastructure projects

Brazil is in the midst of an infrastructure construction spree, including scores of dams across the Amazon basin and a series of road projects that could greatly exacerbated deforestation. Mining is also a major activity in the region.

While Brazil may be better known for losing its forests, it is important to recognize that it also leads the world in conservation efforts. During the 2000's Brazil easily led the world in establishing new protected areas. Those gains were consolidated in 2014, when donors established a trust fund that will underwrite the country's protected areas system through 2039.

While the Amazon rainforest is Brazil's most famous forest, the country also has other types of forest.

The Mata Atlântica or Atlantic Forest is a drier tropical forest that lies along the coast and inland areas to the south of the Amazon. It has been greatly reduced by conversion to agricultural -- especially sugar cane and cattle pasture -- and urbanization. The Mata Atlântica is arguably Brazil's most threatened forest.

The Pantanal is an inland wetland that borders Paraguay and Bolivia and covers an area of 154,884 square kilometers. It includes a mosaic of forests and flooded grasslands.

The cerrado biome is a tropical grassland that covers 1.9 square kilometers, or approximately 22 percent of the country. It is being rapidly destroyed for agriculture. 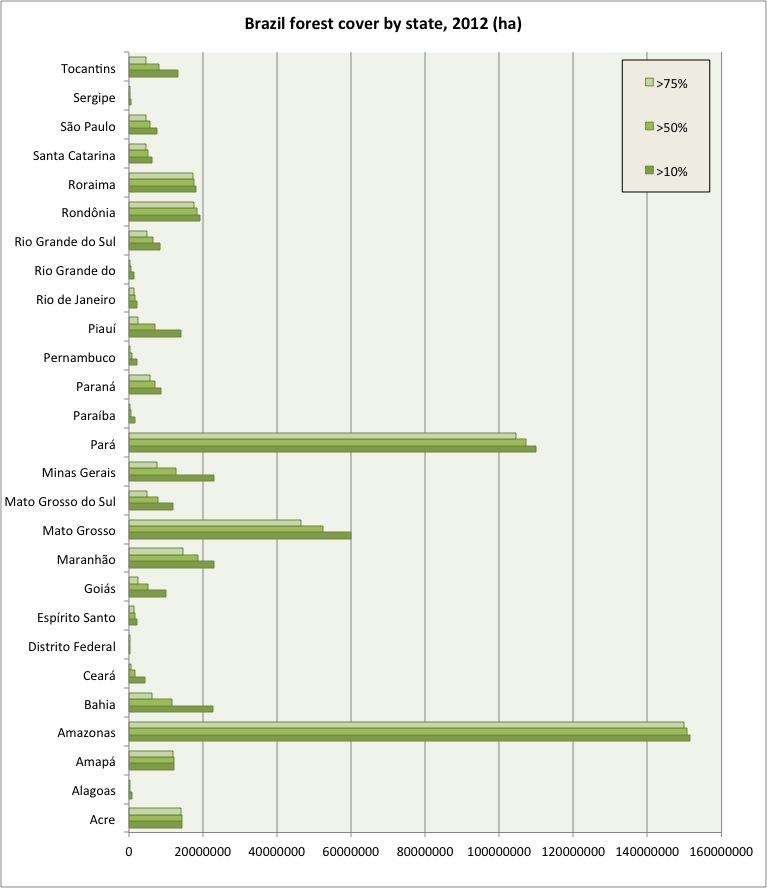