Madagascar, due to its isolation from the rest of the world, has tremendous biodiversity and high rates of endemic species: of more than 200,000 known species found on Madagascar, more than 80 percent exist nowhere else. Unique to the island are over 100 kinds of lemurs, over 300 species of frogs, and 33 species of tenrecs, miniature hedgehog-like animals. However, it is one of the most threatened ecosystems on the planet. More than 80 percent of the forests are gone—half of them since the late 1950s—along with a number of large, charismatic species.

Madagascar has suffered environmental degradation over a significant part of its land mass. Forests that once blanketed the eastern third of the island have now been degraded, fragmented, and converted to scrub land. Spiny forests in the south are rapidly giving way to "cactus scrub" as Indigenous vegetation is cut and burned for subsistence charcoal production. Viewed from above, Madagascar's rivers look as if they are bleeding the country to death as soil is eroded from the central highlands. Each year as much as a third of the country burns and 1 percent of its remaining forests are leveled.

This ecological decline has not been ignored. Environmental regulations have been in place since Queen Ranavalona II first banned slash-and-burn agriculture in 1881. The French rulers passed their own edicts which aimed to protect wildlife and conserve forests. Nonetheless, these efforts met mixed results. On one hand there is still forest in Madagascar—forest that houses thousands of endemic species from lemurs to baobabs to Uroplatus geckos. On the other hand, the amount of forest today is less than at any time since Madagascar was first inhabited by humans less than 2,000 years ago. 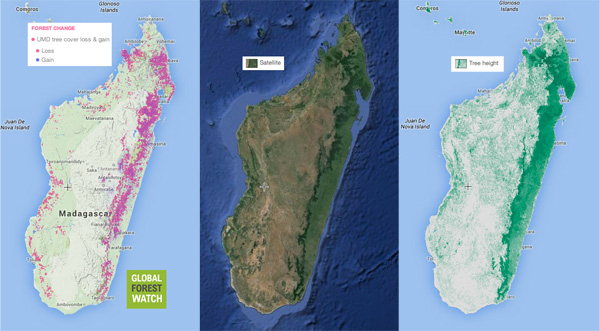 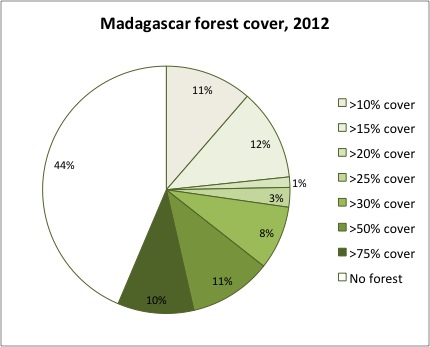 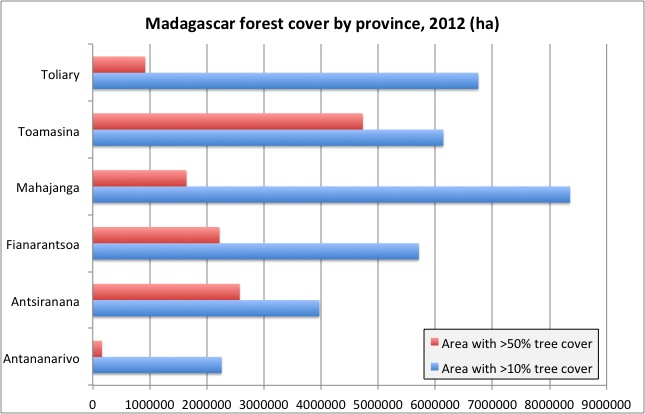 According to data from the University of Maryland's Matthew Hansen (presented via Global Forest Watch), Madagascar's rate of forest loss slightly increased over the 2001-2012 period, peaking between 2007 and 2011. 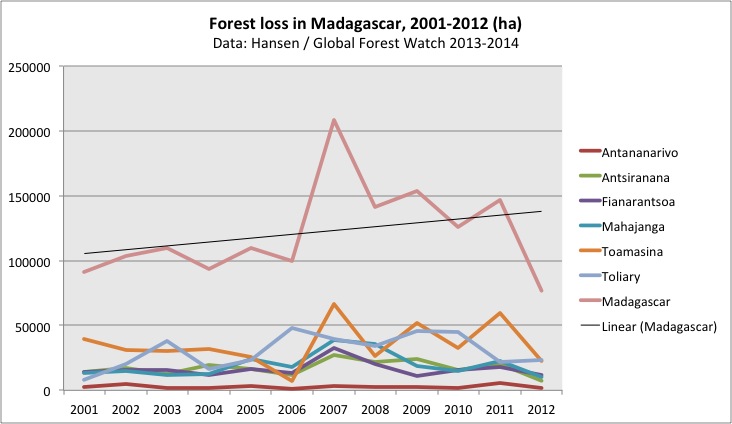 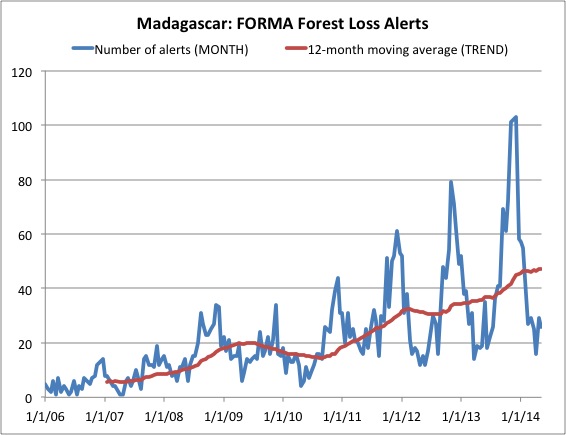 Threats to Madagascar's biodiversity and ecosystems

Madagascar is among the world's poorest countries. As such, people's day to day survival is dependent upon natural resource use. Most Malagasy never have an option to become doctors, sports stars, factory workers, or secretaries; they must live off the land that surrounds them, making use of whatever resources they can find. Their poverty costs the country and the world through the loss of the island's endemic biodiversity.

Tavy is the lifeblood of Malagasy culture and the rural economy. Tavy is mostly used for converting natural vegetation into rice fields. Typically an acre or two of forest is cut, burned, and then planted with rice. After a year or two of production the field is left fallow for 4-6 years before the process is repeated. After 2-3 such cycles the soil is exhausted of nutrients and the land is likely colonized by scrub vegetation or alien grasses. On slopes, the new vegetation is often insufficient to anchor soils, making erosion and landslides a problem.

Tavy is the most expedient way for many Malagasy to provide for their families, and for people where day-to-day subsistence is a question there is little concern for the long-term consequences of their actions. From their perspective, as long as there is more forest land freely available for clearing, you might as well use the land before a neighbor does. Tavy for rice also has spiritual and cultural ties that transcend the economic and nutritional value of rice as a crop.

Logging for timber is especially a problem in the rainforests of eastern Madagascar, particularly on the Masoala peninsula. The high value for Malagasy hardwoods (mostly ebony and rosewood which are in high demand in international markets) makes illegal logging a significant problem in some protected areas.

Timber extraction generally doesn't drive deforestation directly, instead it degrades forests and increases the likelihood of future clearing for subsistence agriculture or other use.

The endemic spiny forests of Madagascar are being cut at an alarming rate for charcoal production. In eking out a living selling little piles of charcoal along roads in southwestern Madagascar, local people turn towards the nearest plant source which in this case is often Alluaudia trees.

Every year as much as a third of Madagascar burns. Fires set for land-clearing and pastureland spread into adjacent wildlands causing damage to the island's unique ecosystems.

With its rivers running blood red and staining the surrounding Indian Ocean, astronauts have remarked that it looks as if Madagascar is bleeding to death. This insightful observation highlights one of Madagascar's greatest environmental problems—soil erosion. Deforestation of Madagascar's central highlands, plus weathering from natural geologic and soil conditions, has resulted in widespread soil erosion, which in some areas may top 400 tons/ha per year. For Madagascar, a country that relies on agricultural production for the foundation of its economy, the loss of this soil is especially costly.

Madagascar's native species have been aggressively hunted and collected by people desperately seeking to provide for their families. While it has been illegal to kill or keep lemurs as pets since 1964, lemurs are hunted today in areas where they are not protected by local taboos (fady). Tenrecs and carnivores are also widely hunted as a source of protein.

Reptiles and amphibians are enthusiastically collected for the international pet trade. Chameleons, geckos, snakes, and tortoises are the most targeted.

The waters around Madagascar serve as a rich fishery and are an important source of income for villagers. Unfortunately, fishing is poorly regulated. Foreign fishing boats encroach on artisanal fishing areas leaving locals and the marine fauna with the short end of the stick. Sharks, sea cucumbers, and lobster may be harvested at increasingly unsustainable rates.

The introduction of alien species has doomed many of Madagascar's endemic species. The best example of damage wrought by introduced species can be found in the island's rivers and lakes. Adaptable and aggressive tilapia, introduced as a food fish, have displaced the native cichlids.

There is really little use bemoaning past environmental degradation in Madagascar. Now the concern should be how to slow this ecological decline and how to best utilize lands already degraded so they can support productive activities today and for future generations. Without improving the well-being of the average Malagasy person, we cannot expect Madagascar's wildlands to persist as fully functional systems and continue to cater to the needs of people.

Madagascar is increasingly the target of industrial developers that aim to transform landscapes for commodity production, including mineral extraction (ranging from gemstones to metals), energy development (extensive heavy oil reserves have been identified in the western part of the country), and plantation agriculture (large-scale oil palm and sugar cane cultivation schemes have been proposed). These activities could take a substantial toll on remaining habitats for the island's unique wildlife.

Solutions to deforestation in Madagascar