|   Venezuela, one of the ten most biodiverse countries on Earth, is home to extensive rainforests ranging from cloud forests of the coastal mountain ranges to the rainforests of the Guiana shield and Amazon basin. Venezuela has more than 21,000 species of plants, 353 mammal species, 323 reptile species, 1,400 bird species, and 288 amphibians.

Forest cover and loss in Venezuela

The largest extent of forests in Venezuela are found in Bolivar, which accounts for about a third of the country's forests. Amazonas is second with about 30 percent of Venezuela's forest cover.

Cattle ranching is the biggest driver of deforestation in Venezuela. In the 1980s and 1990s, gold mining and logging were important causes of deforestation and forest degradation, but logging has dwindled in recent years. Gold mining still causes intense damage where it occurs, but limited to southern reaches of the country. There is potential to expand coal and bauxite mining in the country, potentially putting forests at risk.

In the mid-2000s, former president Hugo Chavez proposed a controversial pipeline that would run 5,000 miles south through the heart of the Amazon rainforest. But the project failed to get off the ground.

On paper Venezuela has protected more than a third of its land mass in its system of parks and reserves. But many of these protected areas have suffered from incursion by illegal loggers and miners. 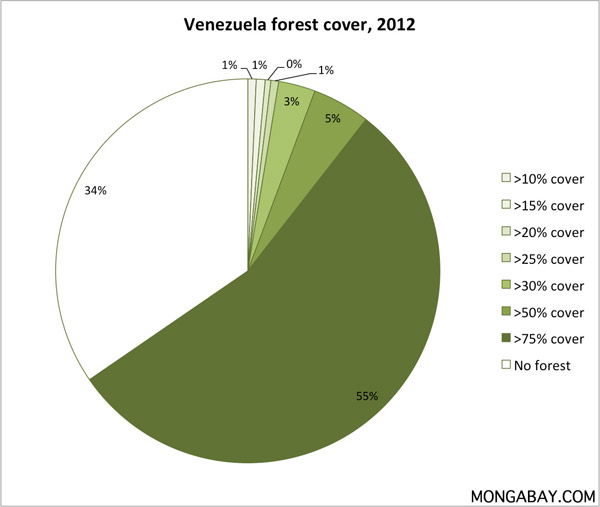