THE IMPACT OF INDUSTRIAL AGRICULTURE IN RAINFORESTS

|  Last updated July 28, 2012
Agricultural use of some rainforest land proves to be a failure because of the nutrient-deficient, acidic soils of these forests. Nevertheless, many commercial agricultural projects are still carried out on rainforest lands, although many of these revert to cattle pasture after soils are depleted. Some floodplain regions, like those of the lower Amazon (várzea), are more suitable for commercial agriculture because annual floods replenish nutrient stores.

Generally forest clearers use slash-and-burn techniques to clear land, but on a much larger scale than traditional practices. Instead of burning a mere 2-10 acres (1-4 ha), agriculturalists burn hundreds to thousands of hectares after felling a tract of forest and leaving it to dry. Burning releases nutrients locked up in vegetation and produces a layer of nutrient-rich material above the otherwise poor soil. The cleared area is quickly planted and supports vigorous growth for a few years, after which the nutrient stock is depleted and large amounts of fertilizer are required to keep the operation viable. Fertilizer may be washed into local streams, affecting fish and aquatic life. When the use of fertilizer is deemed no longer efficient, the land is abandoned and allowed to revert to scrub. Drought-resistant grasses may move in or cattle ranchers may plant imported African grasses for cattle grazing. The land is now only marginally productive and a limited number of cattle can subsist in the area.

When the land is suitable for agriculture, generally large single cash crops like rice, citrus fruits, oil palms, coffee, coca, opium, tea, soybeans, cacao, rubber, and bananas are cultivated. Some of these crops are better adapted to such conditions and last longer on cleared forest lands. However, there are several problems with this type of monoculture (single crop plantations) in the tropics, besides the loss of forest. First, such planting of a single crop makes the crop highly vulnerable to disease and pests. In natural rainforest, widespread infestations are rare because individuals of a given species are widely dispersed. Second, the planting of monocultures can be economically risky with the price fluctuations so common in international commodities markets. Additionally, a single cold spell or drought can devastate a substantial segment of the agricultural economy.

The cultivation of some of these crops in mountainous, watershed areas has adverse effects for the environment, notably the alteration of water cycles and erosion. In Peru, the cultivation of coca plants (containing the basic ingredient for cocaine) was so widespread in the Andean foothills during the 1980s and 1990s that Peruvian river flood cycles were altered in some areas, making the high-water season unpredictable. The most serious environmental concern (other than deforestation) stemming from the cultivation of coca is the dumping of chemicals (including kerosene, sulfuric acid, acetone, and carbide) used to process coca leaves. However, stopping coca cultivation is nearly impossible due to simple economics: no crop outperforms coca.

In some parts of the world, large-scale commercial agriculture takes up the majority of the productive floodplain and volcanic soils, while leaving smaller farmers little choice but to cut farmland from the rainforest. The ownership of these large commercial farms is concentrated in the hands of a wealthy minority, who may benefit from tax incentives to leave some of their land fallow and not fully employed at any given time. These large farm businesses generally do not employ large numbers of locals, though when they do, workers are used seasonally for low wages. In recent years, grain production in Brazil and other Latin American countries has widely accelerated. However, most of the money ends up in the hands of a few large landowners who, in more marginal areas, have relied on subsidies to survive the harsh soil and climate conditions. Only through these handouts have these landowners been able to turn a profit.


Soy production in the Amazon exploded in the early 1990s following the development of a new variety of soybean suitable to the soils and climate of the region. Most expansion occurred in the cerrado, a wooded grassland ecosystem, and the transition forests in the southern fringes in the Amazon basin, especially in states of Mato Grosso and Pará — direct conversion of rainforests for soy has been relatively limited. Instead, the impact of soy on rainforests is generally seen to be indirect. Soy expansion has driven up land prices, created impetus for infrastructure improvements that promote forest clearing, and displaced cattle ranchers to frontier areas, spurring deforestation.

In recent years soy growers, crushers, and traders have taken steps to reduce the environmental impact of their crop in the Amazon biome. After a damaging Greenpeace campaign in 2006, leading players in the industry agreed to a moratorium on soy grown on newly deforested lands. Independent analysis has shown that growers are mostly abiding by the ban: only 12 of 630 sample areas (1,389 of 157,896 hectares) deforested since July 2006 — the date the moratorium took effect — were planted with soy.


Certain types of palm trees produce large red fruit which are rich with oil. After refining, this oil, known as palm oil, can be used to produce all sorts of products, including oils used in foods like chocolates and cookies, cosmetics like makeup, and even biodiesel, a fuel that can be used in cars instead of diesel.

Oil palms, as these trees are called, have very high oil yields -- some of the highest of any crop used for biofuel (plant-based fuel) production. A single hectare (2.5 acres) can produce up to 7 tons of oil, many times what would be produced from the same area of corn, soy, or canola.

Given its high yield and the many uses for its oil, it may seem that oil palm is a great solution to dwindling supplies of fossil fuels and concerns about global warming. However, there are problems is some places where palm oil is being produced, specifically the tropical rainforests of Malaysia and Indonesia.

Nearly 90 percent of global palm oil production was in Malaysia and Indonesia in 2010. Although much of this production took place on land long ago established for agriculture, some of it occurred in areas that were newly cleared specifically for oil palm cultivation. In fact more than half of plantations established since 1990 in those two countries has occurred at the expense of natural forest.

The most threatened ecosystems by expansion of oil palm plantations are rainforests and peatlands. Peatlands are swampy areas where the soils are made of peat — decomposed vegetation. Peat acts as a sponge, soaking up water and helping prevent floods. It also stores large amounts of carbon.

When peatlands are drained, the stored carbon reacts with air to release carbon dioxide into the atmosphere, increasing concentrations of the greenhouse gas. The dry peat then becomes highly flammable, increasing the risk of large-scale fires when plantation developers use fire to clear land and burn agricultural waste.

With available land now dwindling in parts of Indonesia and Malaysia, palm oil companies are expanding into new areas, including New Guinea, more remote parts of Borneo and Sumatra, West Africa, and even parts of the Amazon. 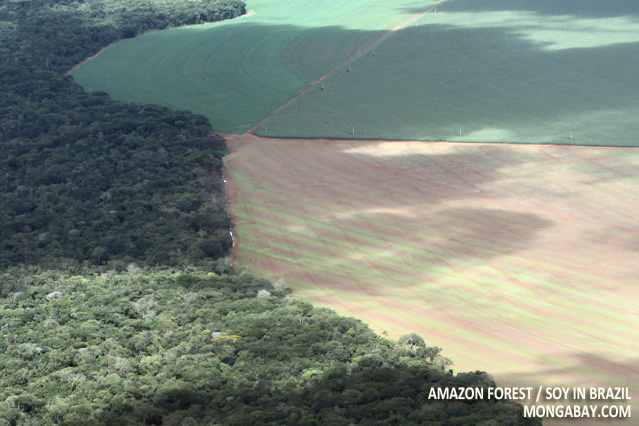 Amazon forest and soy in Brazil. Click image for more pictures of soy in the Amazon. (Photo by R. Butler)